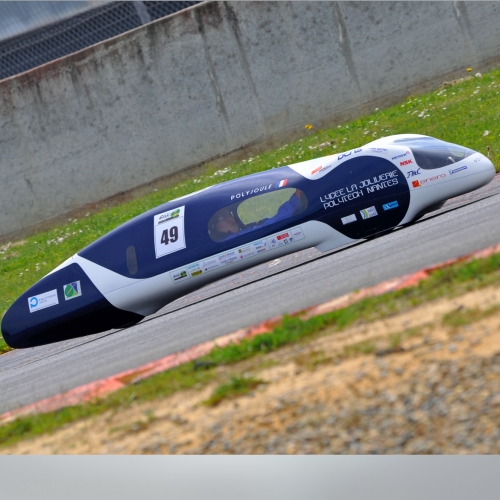 NSK congratulates the winners of the Shell Eco-Marathon 2014 and of the EducEco competition 2014!

The Shell Eco-marathon Europe 2014 took place between the 15th and 18 th May in Rotterdam, Netherlands, welcoming 181 teams from 20 countries.
Then on the 29th – 31st of May the EducEco competition 2014 took place in the centre of Colomiers, France, with 1,200 participants divided into 90 teams.
The aim of the two competitions is to design and run a vehicle over a certain distance using as little fuel as possible.

Once again, the French teams from the Polytech’ Nantes and the Lycée St Joseph La Joliverie performed outstandingly well in spite of very challenging competition, winning first place in their category in each competition with prototypes PolyJoule, CityJoule and MicroJoule.

Shell Eco-marathon Europe 2014
The Joliverie team reaffirmed its position as leader in the ‘Prototype Petrol’ category driving a distance of 3,315 km on only one litre of petrol, a performance never equalled before on an urban circuit.
The Polytech Nantes team also won first place in the ‘UrbanConcept FuelCell’ category with its car CityJoule. Moreover, the result was a NEW WORLD RECORD for a hydrogen-fuelled car, driving at 150 km/kWh or, in other words, equivalent to a distance of 1,350 km on a litre of fuel.

EducEco competition in Colomiers
PolyJoule also set a NEW WORLD RECORD with the impressive feat of driving 6,329 km with the equivalent of 1 litre of petrol (0.79 g of hydrogen for 18.5 km; 707 km/kWh of energy).

NSK is proud to be associated with the two winning teams and is committed to continuing its support for the CityJoule, PolyJoule and MicroJoule projects by contributing its skills in friction reduction. Ensuring the teams are well placed to continue justifying their status as winners, and possibly beat their own world records in the coming year.

As a leader in the field of Motion & Control working together with the top automakers and suppliers around the world, NSK provides solutions that offer higher performance and lower friction in a compact space. Intelligent steering systems, rolling bearings for chassis, drive train, engines and accessories – our products ensure efficient fuel consumption and enhanced active and passive safety in vehicles.