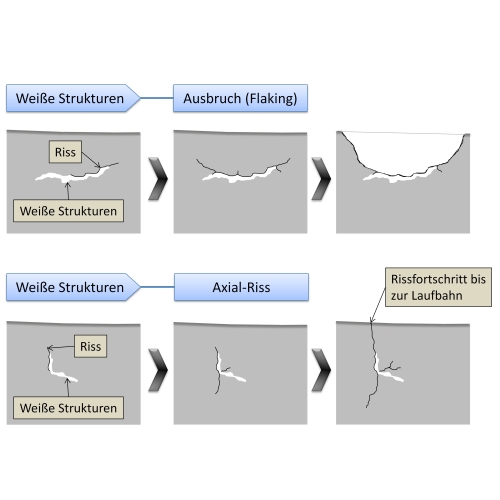 White structure flaking (WSF) is a familiar pattern of damage observed  within bearings used in wind power technology. The cause of this damage has not yet been fully understood. Intensive research and development work by NSK indicates that material selection and heat treatment can reduce the likelihood of damage.

The wind power industry has been trying to deal with the premature damage of bearings that occurs in the form of WSF for many years. Inspections of the defective bearings reveal white etching structural changes below the surface of the raceway. This weakens the material and can result in axial cracks and spalling on the raceway.
Intensive research undertaken by the bearing manufacturers has not been able to determine the causes of WSF completely. One explanation assumes that hydrogen entering the steel weakens the material structure. However, reproduction of this pattern of damage has not yet been possible in bearing tests that model operating conditions in wind turbines. There is also still no explanation as to why the damage occurs so early in bearing life.

Similar patterns of damage in automotive bearings
Similar pattern of damage is known in other applications as well. In the 1990s, white structure flaking resulted in bearing failures in passenger vehicle alternators. The experience gained by NSK in this case can be applied in part to the current bearing problem in wind turbines. For example, one suggested assumption is that the parameters include electric potentials due to differences in potential can occur in both wind turbines and alternators.

In this way, an increased amount of hydrogen in the lubricant results in increased frequency of damage.
However, it must be taken into consideration that in practice, a certain concentration of hydrogen in the lubricant cannot be avoided. Likewise, slippage conditions cannot be completely prevented in the bearings within wind turbines that are in slow-speed operation. The possible passage of current through the bearings cannot be excluded either. This especially applies for those bearings used on the output shaft of the gear unit of the wind turbine. They are located near the generator and WSF occurs at a proportionally higher frequency in these bearings.

Result: the new material exhibits considerably higher strength
NSK invested in developing steel for bearings that demonstrates greater resistance to white structure flaking under the ambient conditions described above. The newly developed alloyed steel achieves this goal with two approaches. On the one hand, its homogeneous structure undergoes less microstructural change under the effects of hydrogen than the steels previously used for this type of bearing. On the other hand, the hydrogen induced crack formation and the resulting crack propagation is significantly reduced due to the increased residual compressive stresses in the material.

The negative effect of hydrogen is reduced
Initial service life tests using the design of a 6206 deep groove ball bearing, manufactured with the newly developed bearing steel, under specific hydrogen input in the test installation, service life was considerably increased in comparison with bearings made of conventional bearing steels. This represents significant progress in the prevention of white structure flaking. Of course, further investigations are necessary in order to achieve a fundamental understanding of white structure flaking. But in the bearings previously affected by this pattern of damage, the probability of its occurrence can be reduced, which is of critical importance for users.

Current status: prototype production
In the meantime, NSK has introduced this new material to leading manufacturers of wind power gear units and wind turbines – with positive feedback. The first prototypes currently in production will be tested in the future under real conditions in pilot applications. In the first phase, cylindrical and tapered roller bearings with outer diameters of up to 400 mm are available.

Alternative: new type of heat treatment
In addition, NSK research Engineers pursued yet another possibility for preventing white structure flaking. Testing various heat treatments with the objective of curtailing hydrogen induced crack propagation. It was observed that an induction hardening process considerably increases both residual compressive stress and material ductility.
The first bearings that have undergone such a heat treatment process are already being tested. In the first phase, NSK will offer induction hardened cylindrical roller bearings with outer diameters of up to 400 mm.

Cost-benefit relation is crucial
As a result, manufacturers of wind turbines and/or the gear units can choose from two possibilities for minimizing the likelihood that white structure flaking will occur. Although the results of practical testing under real conditions are still pending, with due caution it can be said that both technologies contribute to reducing the total cost of ownership of wind turbines.
Minimising the risk of WSF occurrence and consequently reduce the risk of system failure. In turn, from the operator’s perspective, this increases production reliability, reduces maintenance costs and increases production of electricity. At the same time, NSK is continuing to work on discovering the fundamental causes of WSF.