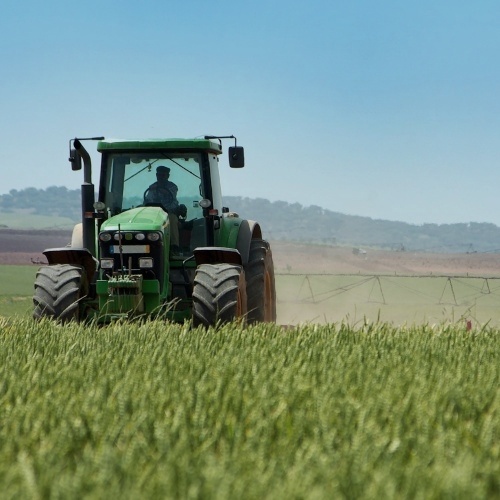 Dirt, moisture, abrasion and high mechanical loads: driving elements in agricultural machinery and the associated mounted implements are subject to severe strain. The bearings used also have to be tailored to these conditions. It is possible to increase the drive systems’ useful life by selecting the ideal bearings or using customised engineering. Special attention should be paid to the materials and seals.

From the tractor – that universal workhorse – to combine harvesters, field choppers, beet harvesters and the many mounted implements for jobs such as ploughing, harvesting and fertilising, the drive systems for mobile agricultural engineering machines use bearings. These bearings have to operate in more extreme conditions than those used for many other applications.

Adverse operating environments
In addition to the high mechanical loads associated with many agricultural engineering applications, adverse operating environments play a major role here. As well as moisture, the whole drive systems of agricultural field machines in particular are exposed to contamination. In the case of sandy soils, for example, this contamination is also highly abrasive. In addition some of the materials distributed by the machines – such as fertiliser or liquid manure – can be extremely corrosive.

For these reasons, standard bearings often do not last long enough when they are used in agricultural engineering. In response to this, NSK has developed a series of bearings specifically for applications in this field. The company can offer both a standard range of products and customer-specific bearings which are tailored precisely to the relevant operating conditions.

This results in an ideal compromise between the two development objectives, i.e. energy efficiency and high load capacity. The clearance is set using an annular spacer fitted between the two inner rings, meaning the component is ready to mount. The housing design has also been optimised to make it as easy as possible to fit the bearing in the transmission thanks to a specially designed flange outer ring.

Furthermore NSK has developed special design features for other bearings with agricultural engineering in mind. These include a cast housing for a harvester flange unit which is tailored to the surrounding structure. Combined with an upstream flinger, a snug-fitting triple seal forms an effective barrier in such adverse operating conditions.

Flanged bearing unit for sowing machines
NSK has also developed a bespoke flanged bearing unit for a manufacturer of sowing systems. This involved making adjustments to cater for higher load requirements: the load rating was increased by 30%. An additional flinger supports the seal. This combination makes a long life possible in very dusty conditions.

It is partly thanks to this customised bearing that the manufacturer is now able to offer a machine which allows farmers to cultivate the soil and sow different crops in a single operation. The flanged bearing unit is supplied with maximum grease packing for lifelong lubrication.

Bearings for disc harrows
Similarly high demands are placed on bearings for disc harrows, which operate in direct contact with soil under high mechanical loads. NSK offers various types of bearings for this application, which boast features such as a triple-lip nitrile rubber seal. These seals are fixed to a steel plate using adhesive and are highly effective. The bearings are available with round and square bores and with cylindrical and spherical outer rings.

Bearing inserts with triple-lip seals and flingers
Flingers are a typical feature of bearings designed for agricultural machinery. They expel contamination before it reaches the seal and thereby ease the strain on the downstream seal systems. The flingers do not come into contact with the outer ring; the bearings are capable of the same maximum speeds as standard bearing inserts and are also dimensionally interchangeable. Bearings with flingers are suitable for applications where a large amount of dirt is to be expected and in machinery which is cleaned using a pressure washer.

Triple-lip seals are another design feature common to bearings for agricultural machinery. Bearing inserts with such seals have a longer life if the drive systems are exposed to a high level of contamination in the form of water or dust. As their dimensions are identical, these bearings can be used to directly replace existing bearing inserts.

Working together is a key factor
When selecting bearings for demanding areas of use a bearing manufacturer, who is willing to work together with designers, can prove to be a real asset for agricultural machinery manufacturers. Time is an important factor because weaknesses often only emerge during the prototype and test phase. Harvesting usually imposes a clear schedule on innovations and improvements: the new machines have to be ready for market by harvest time.

One manufacturer of mounted implements for agricultural machinery was working on developing a new series of rotary swathers (windrowers), which are used to collect crops such as hay and straw. Initial tests showed that the pulleys in the new series soon failed. Action had to be taken, so the manufacturer turned to NSK for help.

Pulleys for rotary swathers (windrowers)
The pulleys used are designed like a double-row, sealed steep-angle ball bearing with a reinforced outer ring. They are exposed to high mechanical loads and become heavily contaminated while working out in the fields. Following a thorough analysis of the operating conditions, NSK suggested using pulleys with reinforced outer rings and a special seal.

The lubricant also had to be optimised. Instead of standard grease, specially developed MA7 grease is now used, which extends the bearings’ life by up to 10% in adverse environments.

Production of new bearing types
Due to the tight schedule in place, the rotary swather (windrower) manufacturer wanted prototypes and production models of the bespoke pulleys within a very short space of time. NSK was able to meet this requirement as a highly flexible plant in Germany is responsible for the production of bespoke bearings. This is where customised bearing solutions for special requirements are engineered and produced. To guarantee fast adjustment and production times, the engineers can draw on a wide range of existing design solutions, e.g. for greases, seals and cages.

The two-week test phase results were excellent, so the manufacturer approved the prototypes for mass production after just six weeks. Now, the rotary swathers have completed their first harvest – and the farmers are very pleased with their performance.