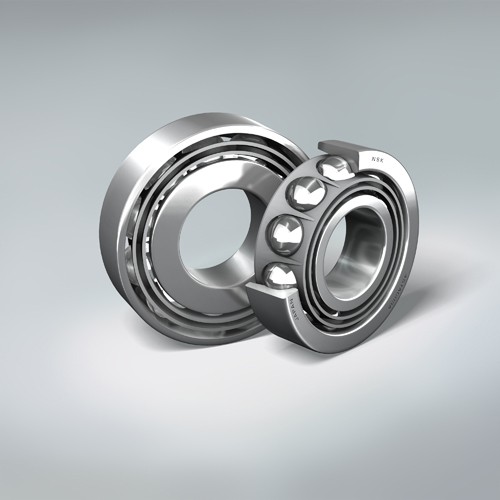 The new angular-contact ball bearings from the NSKTAC-SHR series were specially developed for use in ball screws. Although they have smaller bore sizes than the existing NSKTAC-HR series, they boast the same load carrying capacity. This means they permit machine manufacturers to produce more compact constructions.

NSK has now further enhanced this range, and will be presenting its NSKTAC-SHR series of angular-contact ball bearings at the EMO trade fair. The main difference between the NSKTAC-HR series and the new range is the latter’s smaller bore size. This enables ball screws with smaller shaft diameters to be used at the shaft end, without the need to increase the number of ball bearings per assembly.

This in turn makes it possible to realise more compact power train constructions, thus enabling designers in the machine tool industry to reduce the required installation space. Despite their smaller dimensions, the bearings in the NSKTAC-SHR series have the same load ratings as those in the NSKTAC-HR range. NSK was able to achieve this by taking a number of steps, including optimising the design so as to keep the critical surface pressure on the shoulder of the inner ring at a level that does not shorten the bearing’s service life.

The new bearings are available for shaft diameters of 40 to 100 mm. NSK supply them as ready-to-mount units with the required preload. From the customer’s point of view, this cuts costs and means that ball screws with a smaller outside diameter can be used. The reduced bearing friction increases energy efficiency and drives down operating costs for the whole system.

As the world’s largest producer of ball screws, NSK can also offer complete linear drive solutions along with rotary bearings. The new series of NSK ball screws and linear guides for demanding applications in the machine tool industry will also be showcased at the EMO trade fair – just visit stand B 16 in hall 7.